If, like me, you’re always trying to learn more about the Arizona soccer scene, then it’s very likely that you’ve heard talk of the GCU Men’s Soccer Team, the ‘Lopes. They played two games against Phoenix Rising in March, and then took on FC Arizona in April, both as friendly matches organized by team coaches.

If GCU doesn’t seem like a familiar name when you think of college sports programs, don’t worry! They’ve only been considered a D1 school since July 2013, and it has certainly taken each of their teams a while to develop. (If, like me, you’re a bit confused about GCU’s transition to D1 athletics, they’ve compiled a handy FAQ guide to help answer your questions.) As part of the soccer program’s growth, GCU hired experienced coach Schellas Hyndman, who played professionally in the American Soccer League before becoming an excellent NCAA and MLS coach. In fact, Hyndman has racked up many “Coach of the Year” awards, including MLS Coach of the Year in 2010, during his time with FC Dallas. In addition to a high-caliber coach, GCU cemented their commitment to soccer with a brand new, soccer-specific stadium that can hold over 6,000 fans. I took a quick tour of the facility and let me tell you, it’s gorgeous. From what I hear, students fill the stands during games, with crowd cheers mimicking the passion of established pro soccer teams’ fans. After realizing GCU’s serious commitment to advancing soccer in Arizona, I decided it was high time to sit down with coach Hyndman to learn more about the program, and what it means to the state. 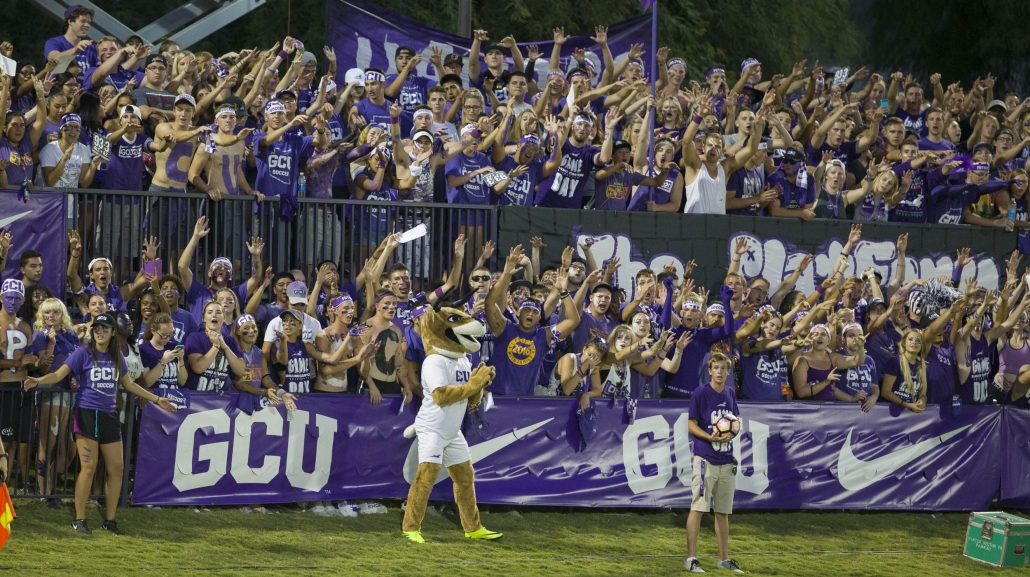 My first question for Coach Hyndman was perhaps a basic one – the question of why, after coaching professionally and for more storied NCAA teams, would he choose to lead the program at GCU? When he joined, the GCU soccer program was just a fledgling, without any of the notoriety normally expected of a program recruiting a top-tier coach. The answer to that, I found, was simple. Coach Hyndman could tell that GCU had what it took to commit themselves to a high-performing, D1 soccer team. Upon his original visit to GCU the university’s President, Brian Mueller, sat down with Hyndman for nearly three hours. After managing teams at Murray State, Eastern Illinois and Southern Methodist Universities, he knew that university presidents do not typically display this level of commitment to their coaches, especially for a soccer program. That initial character showcase, packaged with a glowing review from his former colleague and current GCU VP of Athletics, Mike Vaught, made Hyndman’s decision to come to GCU an easy one.

Coming into a program in its infancy was certainly a challenge, but one for which Coach Hyndman was prepared. He had a four-tier plan for success in his mind, and immediately began its implementation. His goals were to: 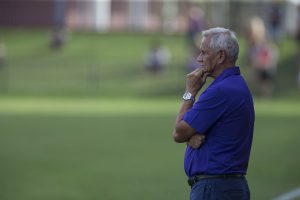 Recruiting clearly had to be one of Coach Hyndman’s biggest focuses. It was also going to be his biggest struggle. Believe it or not, top recruits aren’t really interested in going to a newly established program that hasn’t quite proven its ability to get players to the next level in their careers. Luckily, Hyndman’s extensive history with the game meant he had a lot of relationships across the country, and the globe, to help him overcome this challenge. As the only D1 soccer program in Arizona, it was also imperative that he establish relationships with local high schools and amateur programs to ensure that if these young Arizonans were planning to advance their soccer career, they would consider doing so at GCU. Through both new and existing relationships with high school clinics, National Soccer Academy programs and various levels of professional soccer teams, Hyndman built a diverse roster full of talent. So much talent, in fact, that several current players earned the Gatorade Player of the Year honor when they were in high school, and Junior Forward Niki Jackson was named the Offensive Player of the Year in the Western Athletic Conference (WAC).

With all of the talent Coach Hyndman has combined, he’s also brought in some stellar leadership. Most recently, GCU soccer named Kevin Doyle as Associate Head Coach and Recruiting Coordinator. Hyndman and Doyle have known each other for over thirty years, and their relationship certainly influenced Doyle to leave his position within the Air Force Academy’s soccer program, where he’d been for the last five seasons. The first-year assistant coach, Diego Walsh, had Hyndman as his former college head coach at SMU before beginning his ten-year professional career in the MLS and other global leagues. It’s clear that Hyndman has made enough of an impression on former colleagues that they’re happy to be working with him again, building a new program and positioning it for success. 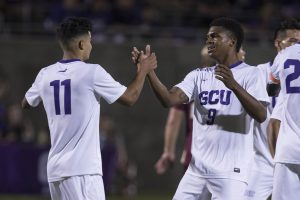 The 2017 season marks the first time the program is fully D1 eligible, meaning the team can participate in the NCAA postseason. It’s also the first year that the team is full of players that Hyndman has drafted and developed, making it especially exciting. The team has a tough schedule ahead of them, starting the season by facing top-ranking opponents Omaha, Creighton and Wisconsin – all on the road. From there, they’ll fall into more conference play, which continue the tough matchups with teams like Seattle U, Utah Valley and UNLV. One thing’s for sure though –  it’s an extremely exciting time for GCU soccer. They have the university’s full commitment, a talented head coach and staff and the motivation to get to the D1 playoffs for the first time in school history. Join us at AZSoccer.net as we follow the season, and be sure to check out a game at the brand-new stadium! 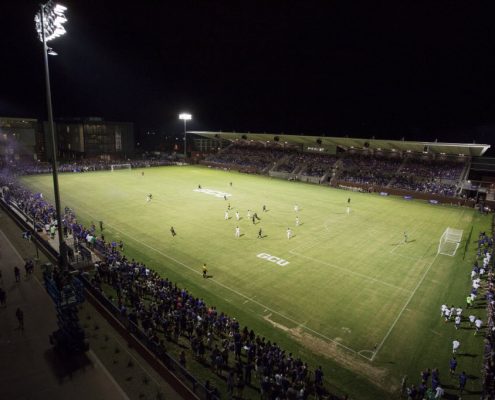